After the Reading Festival on Bank Holiday Monday, more than two dozen volunteers helped to salvage tents, numerous sleeping bags, bedding rolls and camping chairs that were discarded by festival goers. Additional finds included sought after tarpaulins, blankets, unopened packets of food, cooking utensils, eating utensils and plenty of other odds and ends. The haul will make a big difference to the lives of rough sleepers in Newbury.

Although the volunteers were expecting to find many abandoned possessions at the festival campsite, they were horrified by the scale of the waste. Thousands of tents, sleeping bags, bedding rolls and camping chairs had been left behind by departing festival-goers, as well as swathes of rubbish.

Working alongside other charities, the volunteers quickly packed up tents and anything else they found that could be useful for rough sleepers. Everything that could not be retrieved during the salvage operation (which continued on Tuesday and Wednesday) would be bulldozed and taken to incinerators or landfill. They were working against the clock. 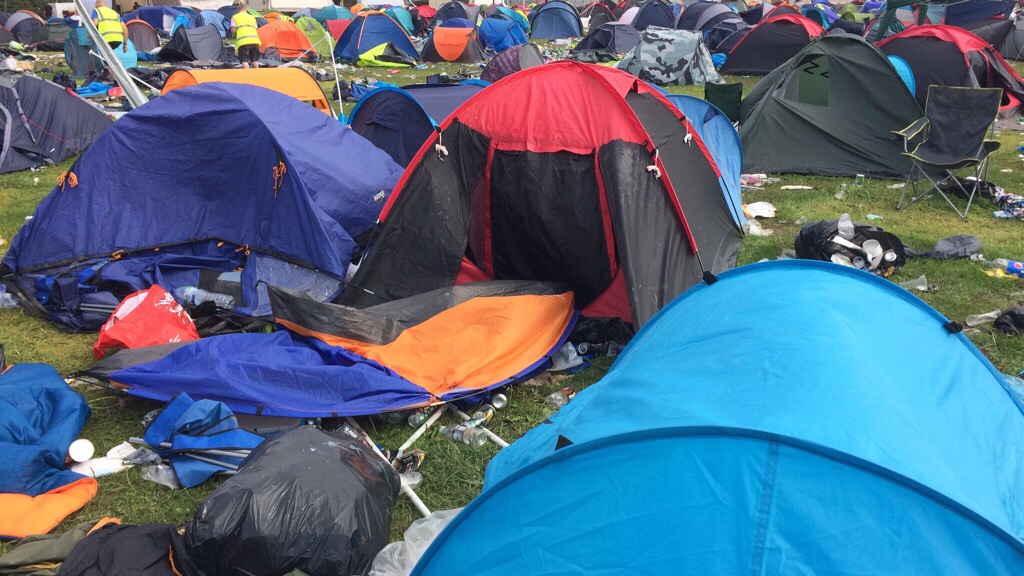 Volunteers worked against the clock to collect and salvage as much as possible.

The volunteers took away several carloads of items, most of which were in excellent condition. They delivered most of the salvaged items to Newbury Soup Kitchen volunteer Mai-Britt, who will store them in her garage until they are needed. As the first couple of cars were unloaded, she exclaimed that it was just like Christmas.

Some tents had been deliberately slashed or soiled so they were worthless. This senseless destruction and waste was both maddening and saddening. The volunteers were very glad they were wearing rubber gloves.

Anne Harding organised the clean-up on behalf of Newbury Soup Kitchen. She said:

I’d like to say a big thank you to all the fabulous volunteers who helped today. Not only will the salvaged items improve the lives of local homeless people, we saved a vast amount of perfectly good possessions from ending up in landfill. However, we could have stayed for longer and salvaged more if we had had a van to take the stuff away. Next year we will make sure we do.

Plans For Next Year

Many salvage volunteers said that they found it satisfying and enjoyable, despite the mess and occasional unpleasant discovery. Some have already offered to help again next year. A van, more support for washing sleeping bags and short term storage are being planned for next year.

Yes, there were were some frustrations, though Anne has made a list of learning points for 2019 that should ease the next salvage operation. In addition, post salvage organisation has to be considered as tents that are separated but in total will have to be erected to work out what goes with what. In addition, sleeping bags will need to be washed, which is proving to be an investment in time.

With this abundance of product now available to the Soup Kitchen, the next challenge is storage. With the loss of the Greenham Park facility in the summer, donated items are stored in a volunteer’s garage. Space was already running out but subsequent to the Festival salvage and additional equipment en route, the seams are splitting. We will be making an appeal shortly for storage facilities but as a precursor, if there is any local business that has storage we can utilise in the short or long term, we would love to hear from you.